Andrei Tarkovsky (1932-1986) firmly positioned himself as the finest Soviet director of the post-War period. But his influence extended well beyond the Soviet Union.  The Cahiers du cinéma consistently ranked his films on their top ten annual lists. Ingmar Bergman went so far as to say, “Tarkovsky for me is the greatest [director], the one who invented a new language, true to the nature of film, as it captures life as a reflection, life as a dream.” And Akira Kurosawa acknowledged his influence too, adding, “I love all of Tarkovsky’s films. I love his personality and all his works. Every cut from his films is a marvelous image in itself.”

Few filmmakers have been so often, or so unambiguously, called masters of the medium as Andrei Tarkovsky. In acclaimed pictures like The Mirror, Stalker, and Nostalghia (find free online versions of his films here), he realized his visions without compromise. If you can engage with these visions, watching a Tarkovsky film makes for a cinematic experience without compare. Geoff Dyer, for example, one of the director’s particularly high-profile fans, recently published Zona: A Book About a Film About a Journey to a Room, a volume on nothing but watchingStalker. If you can’t engage with these visions, you may find watching a Tarkovsky film rough going indeed. (Admittedly, Nostalghia‘s nine minutes of candle-carrying requires a certain frame of mind.) But if you make films, you’d do well to consider Tarkovsky’s methods either way. The clip above from the documentary Voyage in Time offers some insight into how the man thought about his work.

First and foremost, he didn’t think about it as “work,” separate from other pursuits. “It’s not hard to learn how to glue the film, how to work a camera,” Tarkovsky says. “But the advice I can give to beginners is not to separate their work, their movie, their film, from the life they live. Not to make a difference between the movie and their own life.” These words don’t come as a surprise from a director well known for crafting deeply personal films, but one suspects that creators of any kind all too rarely find it in themselves to heed them. But Tarkovsky, always described as a thoroughly rigorous man, could have lived no other way. “Cinema is a very difficult and serious art,” he continues. “It requires sacrificing of yourself. You should belong to it, it shouldn’t belong to you. Cinema uses your life, not vice versa.” A great demand indeed, but we’d surely have a more interesting cinema if young directors accepted it. The artistic world could use more Tarkovskys.

Tarkovsky’s Advice to Young Filmmakers: Sacrifice Yourself for Cinema

Tarkovsky is mainly known as a film director. During his career he directed only seven feature films, as well as three shorts from his time at VGIK. He also wrote several screenplays. He furthermore directed the play Hamlet for the stage in Moscow, directed the operaBoris Godunov in London, and he directed a radio production of the short story Turnabout by William Faulkner. He also wroteSculpting in Time, a book on film theory.

Tarkovsky’s first feature film was Ivan’s Childhood in 1962. He then directed Andrei Rublev in 1966, Solaris in 1972, The Mirror in 1975 and Stalker in 1979. The documentary Voyage in Time was produced in Italy in 1982, as was Nostalghia in 1983. His last filmThe Sacrifice was produced in Sweden in 1986. Tarkovsky was personally involved in writing the screenplays for all his films, sometimes with a co-writer. Tarkovsky once said that a director who realizes somebody else’s screenplay without being involved in it becomes a mere illustrator, resulting in dead and monotonous films. 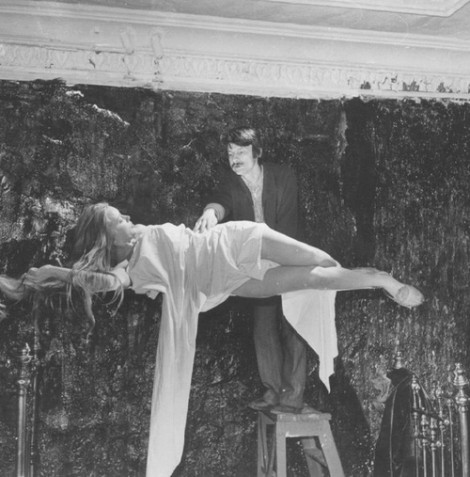 “Why do I so frequently include a levitation scene, a body rising up? Simply because the scene has a great power. This way things can be created that are more cinematic, more photogenic. When I imagine a person suspended in mid-air, it pleases me.. I find myself filled with emotion. If some fool asks me why in my last film people float up in the air, I would say: “It’s magic”. If the same question came from someone with a more acute intelligence & poetic sensibility, I would respond that for these characters love was not the same thing as it was for the author of Betty Blue.

For me love is the supreme manifestation of mutual understanding, and this cannot be represented by the sexual act. Everybody says that if there is no ‘love’ in a film, it is because of censorship. In reality it is not ‘love’ that’s shown on screen but the sexual act. The sexual act is for everyone, for every couple, something unique. When it is put into films, it’s the opposite.”

“We can express our feelings regarding the world around us either by poetic or by descriptive means. I prefer to express myself metaphorically. Let me stress: metaphorically, not symbolically. A symbol contains within itself a definite meaning, certain intellectual formula, while metaphor is an image. An image possessing the same distinguishing features as the world it represents. An image — as opposed to a symbol — is indefinite in meaning. One cannot speak of the infinite world by applying tools that are definite and finite. We can analyse the formula that constitutes a symbol, while metaphor is a being-within-itself, it’s a monomial. It falls apart at any attempt of touching it.”
Andrei Tarkovsky