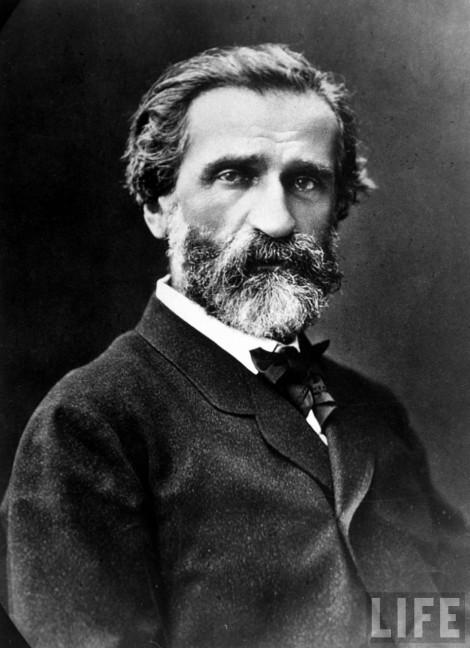 Giuseppe Fortunino Francesco Verdi (9 or 10 October 1813 – 27 January 1901) was an Italian Romantic composer primarily known for his operas. Verdi and Richard Wagner are considered the two preeminent opera composers of the nineteenth century. Verdi dominated the Italian opera scene after the eras of Bellini, Donizetti and Rossini. His works are frequently performed in opera houses throughout the world and, transcending the boundaries of the genre, some of his themes have long since taken root in popular culture, as “La donna è mobile” from Rigoletto, “Libiamo ne’ lieti calici” (The Drinking Song) from La traviata, “Va, pensiero” (The Chorus of the Hebrew Slaves) from Nabucco, the “Coro di zingari” (Anvil Chorus) from Il trovatore and the “Grand March” from Aida.

Verdi was born in Roncole ( which was then a part of the First French Empire. His given name, registered in French, was Joseph Fortunin François) in the former duchy of Parma, he first studied music in the neighboring town of Busseto. Then, upon being rejected in 1832, because of his age, by the Milan Conservatory, he became a pupil of the Milanese composer Vincenzo Lavigna. He returned to Busseto in 1833 as conductor of the Philharmonic Society.

At the age of 25 Verdi again went to Milan. His first opera, Oberto, was produced at La Scala with some success in 1839. His next work, the comic opera Un giorno di regno (King for a Day, 1840), was a failure, and Verdi, lamenting also the recent deaths of his wife and two children, decided to give up composing. After more than a year, however, the director of La Scala succeeded in inducing him to write Nabucco (1842). The opera created a sensation; its subject matter dealt with the Babylonian captivity of the Jews, and the Italian public regarded it as a symbol of the struggle against Austrian rule in northern Italy. I Lombardi (1843) and Ernani (1844), both great successes, followed, but of the next ten productions only Macbeth (1847) and Luisa Miller (1849) have survived in the permanent operatic repertory. Verdi’s three following works, Rigoletto (1851), Il Trovatore (1853), and La Traviata (1853), brought him international fame and remain among the most popular of all operas.

Operas written in the middle of Verdi’s career, including Un ballo in maschera (A Masked Ball, 1859), La forza del destino (The Force of Destiny, 1862), and Don Carlo (1867), exhibit a greater mastery of musical characterization and a greater emphasis on the role of the orchestra than his earlier works. Aïda (1871), also of this period and probably Verdi’s most popular opera, was commissioned by the khedive of Egypt to celebrate the opening of the Suez Canal; it was first performed in Cairo. Three years later, Verdi composed his most important non-operatic work, the Requiem Mass in memory of the Italian novelist Alessandro Manzoni. Verdi’s other non-operatic compositions include the dramatic cantata Inno delle nazioni (Hymn of the Nations, 1862) and the String Quartet in E minor (1873).

In his 70s, Verdi produced the supreme expression of his genius, Otello (1887), composed to a libretto skillfully adapted by the Italian composer and librettist Arrigo Boito from the Shakespearean tragedy Othello. This was followed by Verdi’s last opera, Falstaff (1893), also adapted by Boito from Shakespeare, and generally considered one of the greatest of all comic operas.

In general, Verdi’s works are most noted for their emotional intensity, tuneful melodies, and dramatic characterizations. He transformed the Italian opera, with its traditional set pieces, old-fashioned librettos, and emphasis on vocal displays, into a unified musical and dramatic entity. His operas are among those most frequently produced in the world today.(source http://www.classical.net/music/comp.lst/verdi.php)

Verdi’s operas (in Italian unless noted) and their date of première are:

10 reasons why we love Giuseppe Verdi

He’s the untrained, scandal-courting, tragedy-stricken king of opera – sometimes known simply as Joe Green – and here’s why we love him for it.

In an unrivalled bout of creativity, Verdi smashed out three of the operatic repertoire’s biggest hits in a mere three years between 1851 and 1853 – Rigoletto, Il trovatore and La traviata. 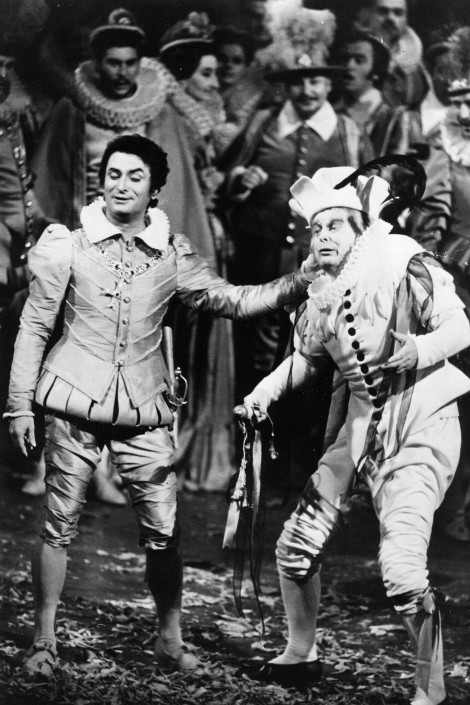 2. Radames (in Aida) is such a big part that even Roberto Alagna couldn’t handle it

Alright, maybe we’re being a little unfair to dear Roberto – and the La Scala audience are notoriously difficult to please. But when he was booed off the stage during a 2006 performance of Aida , it just went to show exactly how challenging Verdi’s works are, even if you’re at the very top of your game.

Despite losing both of his first children before they were out of infancy and, unbelievably, his adored wife as well at the tender age of 26 in 1840, Verdi turned things around. On the back of his inestimable heartache, he bounced back with two of his most successful operas in 1842 – Nabucco and I Lombardi.

It’s one of the operatic canon’s greatest ever moments. Simply put, if you’re a tenor and you haven’t tackled this one, well… you’re not quite a tenor yet.

5. He wasn’t averse to a bit of scandal

After the death of his first wife, Verdi naturally moved on – but cohabiting with soprano Giuseppina Strepponi before they married caused quite a to-do among the great and good.

6. He proved you don’t have to be a technical genius

Verdi was the first to admit his music wasn’t the most technically challenging in purely academic terms: “Of all composers, past and present, I am the least learned,” he said. But did that stop him writing some of the most heart-wrenching arias of the day?

The scourge of nervous tenors on opening night, the infamous high C of Verdi’s aria ‘Di quella pira’ from Il Trovatore, was not actually written in the composer’s original score. In fact, unlike some of his more flamboyant contemporaries, he hardly ever sent his tenors as high as a high C, as he found the pressure of it distracted both the audience and the performer.

8. He was a showbiz kind of guy

Being a generally revered part of the musical establishment has its perks – Giuseppe appeared in the pages of Vanity Fair in 1879.

9. The Chorus of the Hebrew Slaves

More than merely an evocative musical rendering of Jewish exile in his opera Nabucco, Va Pensiero (to give it its original Italian title) has become emblematic of political struggle in Italy. In 2009, it was briefly considered for a new national anthem, and conductor Riccardo Muti once led a whole audience in a performance of the chorus as an act of protest against arts cuts.

The inimitable Victor Borge was a huge fan of Giuseppe Verdi. Or, as he affectionately referred to him, Joe Green.

2 thoughts on “Giuseppe Verdi: The Italian born a Frenchman”