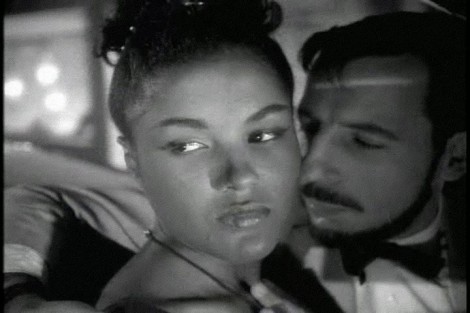 When a great photographer ( Reinfried Marass), talks to you about a film and images you feel immediately very curious. Reinfried sent me his point of view (precious to me) about “Soy Cuba” :

” Soy Cuba .. this is a MUST see ..
I’m Cuba one of the very best photographed movies at all (by Sergei Urusevsky) .. For sure the photographer was familar with S. Eisenstein (of course). But I guess he also was familar with the work of Leni Riefenstahl; as far as I know she was the very first movie photographer who used ‘long elevator shots’ in her Nazi propaganda films. (ok, was for the Nazis, but as photographer she was one of the best)
One must see the whole movie to ‘get’ it but I like to bring your focus on some scenes available on youtube:

Mostly an extremly wide angle lens was used … especially watch the scene starting at the hotel roof (around 2.06) … incredible done ..and all in ONE TAKE (no cutting !!!)
Hint: a special gel by the Sovjet army was used for the lens … that’s why there are NO waterdroplets on the lens when moving in and out of the pool …. and note how the sound was muted when going down in the water!

The movie, done in 64 flopped in the USSR (considered to naive) as well as in Cuba, and was archived. After the fall of the iron curtain is was brought to the attention of Martin Scorsese. He was thrilled by it and together with Francis Ford Coppola the movie was reissued.

There also is a great comprehensive overview about the movie, the director, the photographer etc ….

Reinfried Marass ( re) view
Here you  can find some information about this great film::

I am Cuba (Spanish: Soy Cuba; Russian: Я Куба, Ya Kuba) is a 1964 Soviet-Cuban film directed by Mikhail Kalatozov at Mosfilm. The film was not received well by either the Russian or Cuban public and was almost completely forgotten until it was re-discovered by filmmakers in the United States thirty years later. The acrobatic tracking shots and idiosyncratic mise en scene prompted Hollywooddirectors like Martin Scorsese to begin a campaign to restore the film in the early 1990s.

The film is shot in black and white, sometimes using infrared film obtained from the Soviet military to exaggerate contrast (making trees and sugar cane almost white, and skies very dark but still obviously sunny). Most shots are in extreme wide-angle and the camera passes very close to its subjects, whilst still largely avoiding having those subjects ever look directly at the camera.

“I Am Cuba” is an anti-American propaganda film, made as a Cuban-Soviet co-production, that has been snatched from oblivion, restored, and released in the United States as a presentation of Martin Scorsese and Francis Coppola. Since the film’s prediction of a brave new world under Fidel Castro has not resulted in a utopia for Cubans, who suffer under one of the world’s most dismal bureaucracies, the film today seems naive and dated – but fascinating.

The Soviets fielded a first-class team of advisers to help in the production. The script was co-authored by Yevgeny Yevtushenko, then the USSR’s poetic superstar, and Enrique Pineda Barnet, a Cuban novelist. It was directed by the veteran Russian filmmaker Mikhail Kalatozov, then 61, whose “The Cranes are Flying” (1957) had won the Palme d’Or at Cannes a few years earlier. That film featured spectacular camera techniques, but they are upstaged by his opener in “I Am Cuba” and by some of the other sequences, which owe much to Fellini’s influential “La Dolce Vita” (1960).” (source http://www.rogerebert.com/reviews/i-am-cuba-1995)

“Cinema’s singular dream, so often betrayed elsewhere, is to deliver such visions as this” 5/6. Number 2 in Critics Choice, TIME OUT LONDON January 2006

“Nothing quite like I Am Cuba has been created either before or since” 4/5 THE TIMES, Wendy Ide

“Beautiful… Visually dazzling… Miraculous… I am baffled as to why it isn’t in everyone’s Top 10 lists” 5/5, Peter Bradshaw, THE GUARDIAN

“A fascinating artefact of 20th century politics, and an acknowledged masterpiece of technical filmmaking” CHANNEL4.COM REVIEW

“The gliding black and white imagery is magnificent. A masterpiece” THE INDEPENDENT, 5/5&

“A Classic of its kind” THE OBSERVER, January 2006

“One of the most deliriously beautiful films ever made” LA WEEKLY

“Visually staggering… A classic” VARIETY US