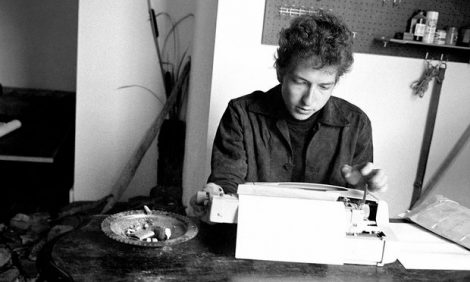 Bob Dylan has been awarded the 2016 Nobel Prize for Literature “for having created new poetic expressions within the great American song tradition”. Just over 50 years ago, following the release of his fifth album, Bringing It All Back Home, the Guardian published Chimes of freedom flashing – a look at the poetry of Bob Dylan. 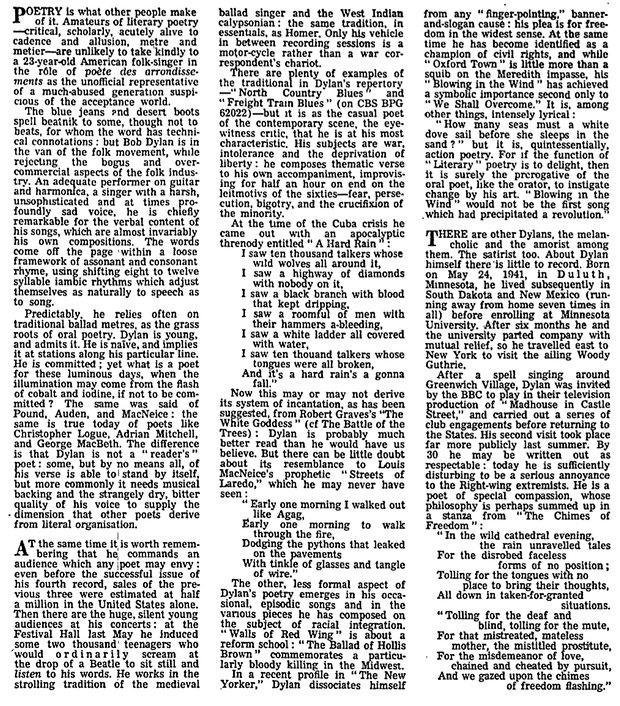 This nearly seven-minute folk song appears in the middle of Dylan’s 1963 album “The Freewheelin’ Bob Dylan,” a poetic musing that showed his talent early on. The song concludes with Dylan alluding to dark times: “And the executioner’s face is always well hidden/Where hunger is ugly, where souls are forgotten/Where black is the color, where none is the number/And I’ll tell and speak it and think it and breathe it/And reflect from the mountain so all souls can see it.” The above version was recorded in 1963 at Town Hall in New York City.

Dylan capped his landmark 1965 album “Highway 61 Revisted” with this 11-minute number that finds him meandering down “Desolation Row.” Throughout the narrative, Dylan weaves a number of famous characters throughout time, both real and fictional. Go down Dylan’s rabbit hole with the version above, recorded in 1966.

On “Blonde on Blonde,” Dylan unleashed numerous poetic fan favorites like “Stuck Inside of Mobile With the Memphis Blues Again,” “Leopard-Skin Pill-Box Hat,” and the epic closer “Sad-Eyed Lady of the Lowlands.” The third song, “Visions of Johanna,” is one that many Dylan fans hold in high regard. And it’s peak Dylan doing what any literary great will do: tell a story open to multiple interpretations. The above version was also recorded live in 1966.

Dylan opened 1974’s “Blood on the Tracks” with “Tangled Up in Blue,” a song that jumped time and space, indicating he wasn’t afraid to play with narrative conventions. It’s a song he’s said “took him 10 years to live and two years to write.” Above is the original studio version.

This opener on 1976’s “Desire” is Dylan at his fiercest, a powerful protest song about racism and wrongful imprisonment of boxer Rubin “Hurricane” Carter. Here, Dylan is straightforward in his storytelling – conveying strong sentiments through passionate and angry lyrics.

« The Season of Phantasmal Peace: Derek Walcott / Espen Erichsen
I heard of a man … Leonard Cohen »