By the River Piedra I Sat Down and Wept : Paulo Coelho

Posted by Carmen Lobo✔ ⋅ August 12, 2018 ⋅ Leave a comment
Filed Under  By the River Piedra I Sat Down and Wept, Paulo Coelho

But he went on.
“For the past two weeks, I haven’t been able to stand the sadness in my soul. I went to my superior and told him what was happening to me. I told him about my love for you and what had begun when we were taking the inventory.”
A light rain began to fall. I bowed my head and gathered the front of my coat. I suddenly didn’t want to hear the rest of the story.
“So my superior said, ‘There are many ways to serve our Lord. If you feel that’s your destiny, go in search of it. Only a man who is happy can create happiness in others.’
” ‘I don’t know if that’s my destiny,’ I told my superior. ‘Peace came into my heart when I entered this seminary.’
” ‘Well, then, go there and resolve any doubts you may have,’ he said. ‘Remain out there in the world, or come back to the seminary. But you have to be committed to the place you choose. A divided kingdom cannot defend itself from its adversaries. A divided person cannot face life in a dignified way.'”
He pulled something from his pocket and handed it to me. It was a key.
“The superior loaned me the key to the house. He said that he would hold off for a while on selling the possessions. I know that he wants me to return to the seminary. But he was the one who arranged the presentation in Madrid—so that we could meet.”
I looked at the key in my hand and smiled. In my heart, bells were ringing, and the heavens had opened to me. He could serve God in a different way—by my side. Because I was going to fight for that to happen.
I put the key in my bag.

The basilica loomed in front of us. Before I could say anything, someone spotted him and came toward us. The light rain continued, and I had no idea how long we would be there; I couldn’t forget that I had only one set of clothes, and I didn’t want them to get soaked.
I concentrated on that problem. I didn’t want to think about the house—that was a matter suspended between heaven and earth, awaiting the hand of destiny.
He introduced me to several people who had gathered around. They asked where we were staying, and when he said Saint-Savin, one of them told us the story of the hermit saint who was buried there. It was Saint Savin who had discovered the well in the middle of the plaza—and the original mission of the village had been to create a refuge for religious persons who had left the city and come to the mountains in search of God.
“They are still living there,” another said.
I didn’t know if the story was true, nor did I have any idea who “they” were.
Other people began to arrive, and the group began to move toward the entrance of the grotto. An older man tried to tell me something in French. When he saw that I didn’t understand, he switched to an awkward Spanish.
“You are with a very special man,” he said. “A man who performs miracles.”
I said nothing but remembered that night in Bilbao when a desperate man had come looking for him. He had told me nothing about where he had gone, and I hadn’t asked. Right now, I preferred to think about the house, which I could picture perfectly—its books, its records, its view, its furniture.
Somewhere in the world, a home awaited us. A place where we could care for daughters or sons who would come home from school, fill the house with joy, and never pick up after themselves.
We walked in silence through the rain until finally we reached the place where the visions of Mary had occurred. It was exactly as I had imagined: the grotto, the statue of Our Lady, and the fountain—protected by glass—where the miracle of the water had taken place. Some pilgrims were praying; others were seated silently inside the grotto, their eyes closed. A river ran past the entrance, and the sound of the water made me feel at peace. As soon as I saw the image, I said a quick prayer, asking the Virgin to help me—my heart needed no more suffering.
If pain must come, may it come quickly. Because I have a life to live, and I need to live it in the best way possible. If he has to make a choice, may he make it now. Then I will either wait for him or forget him.

By the River Piedra I Sat Down and Wept 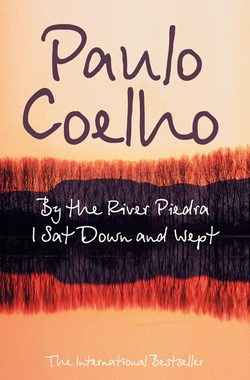 Rarely does adolescent love reach its full potential, but what happens when two young lovers reunite after eleven years? Time has transformed Pilar into a strong and independent woman, while her devoted childhood friend has grown into a handsome and charismatic spiritual leader. She has learned well how to bury her feelings . . . and he has turned to religion as a refuge from his raging inner conflicts.

Now they are together once again, embarking on a journey fraught with difficulties, as long-buried demons of blame and resentment resurface after more than a decade. But in a small village in the French Pyrenees, by the waters of the River Piedra, a most special relationship will be reexamined in the dazzling light of some of life’s biggest questions.