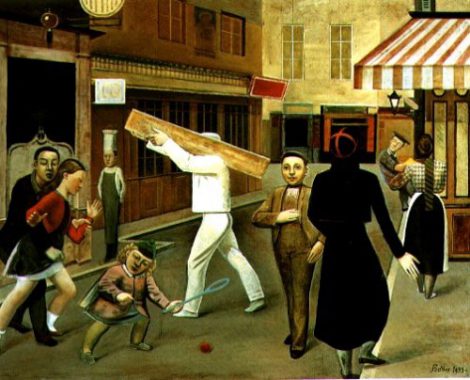 Across the street, the carpenter carries a golden board across one shoulder, much as he bears the burdens of his life. Dressed in white, his only weakness is temptation. Now he builds another wall to screen him.

The little girl pursues her bad red ball, hits it once with her blue racket, hits it once again. She must teach it the rules balls must follow and it turns her quite wild to see how it leers at her, then winks.

The oriental couple wants always to dance like this: swirling across a crowded street, while he grips her waist and che slides to one knee and music rises from cobblestones—some days Ravel, some days Bizet.

The departing postulant is singing to herself. She has seen the world’s salvation asleep in a cradle, hanging in a tree. The girl’s song makes the sunlight, makes the breeze that rocks the cradle.

The baker’s had half a thought. Now he stands like a pillar awaiting another. He sees white flour falling like snow, covering people who first try to walk, then crawl, then become rounded shapes: so many loaves of bread.

The baby carried off by his heartless mother is very old and for years has starred in silent films. He tries to explain he was accidentally exchanged for a baby on a bus, but he can find no words as once more he is borne home to his awful bath.

First the visionary workman conjures a great hall, then he puts himself on the stage, explaining, explaining: where the sun goes at night, where flies go in winter, while attentive crowds of dogs and cats listen in quiet heaps.

Unaware of one another, these nine people circle around each other on a narrow city street. Each concentrates so intently on the few steps before him, that not one can see his neighbor turning in exactly different,

yet exactly similar circles around them: identical lives begun alone, spent alone, ending alone—as separate as points of light in a night sky, as separate as stars and all that immense black space between them.

« A Child of Our Time: Michael Tippett
A streetcar named desire : Tennessee Williams »

One thought on “The Street: Stephen Dobyns / Balthus”